“Despite the negative press covfefe,” Trump wrote, and nothing more. The tweet was deleted, but only after it had been up for several hours. It gave Twitter a lot to chew on. USA TODAY

The tweet came, as they often do, when many others on the East Coast are sleeping.

But when President Trump complained to the twitterverse about all the “negative press covfefe,” just after midnight Wednesday, sleep experts saw it as more than just a laughable lapse.

“Cognitive tasks like spelling are impaired by poor sleep,” says neurologist Chris Winter, author of the new book The Sleep Solution. “I would think something’s up, to put it mildly,”

Trump has claimed to prefer three to four hours of sleep. And he shows “many classic signs of sleep deprivation,” including bad decision making, inability to focus, irritability and impulsiveness, says Winter, who describes himself as “a fairly conservative guy.”

It may not be a temporary phenomenon, a new study in the Journal of Neuroscience suggests. Chronic sleep deprivation in mice causes microglia — brain cells that get rid of toxins and clear debris — to eat small pieces of the synapses, the connections that allow neurons to communicate with each other, the study found. It did not mention Trump.

Charlottesville, Va. neurologist Chris Winter is the
Charlottesville, Va. neurologist Chris Winter is the author of The Sleep Solution. (Photo: Andrea Hubbell Photography)
If this activation is prolonged, it could “trigger a chain of events” that leads to cellular degeneration, which is related to cognitive impairment, say neuroscientist Chiara Cirelli, who led the research. Sleep is “very, very important” to normalize the functions of the brain’s synapses, she said.

“I don’t think we know of any cognition function that isn’t affected by sleep deprivation,” added Cirelli, a physician who directs the Wisconsin Center for Sleep and Consciousness and is a professor of psychiatry at the University of Wisconsin-Madison’s medical school. She cites effects on working memory, the “capacity to integrate a lot of information and even appreciation of humor.”

Asked if she thinks about this when seeing and reading about Trump, Cirelli noted, “I cannot not think about this.”

Aetna CEO Mark Bertolini takes sleep so seriously the company pays employees up to $300 a year if they regularly sleep at least seven hours a night as shown on their tracking devices.

White House Chief of Staff Reince Priebus told reporters on Air Force One on the way to Saudi Arabia that the president didn’t get much sleep on the flight. In his speech in Riyadh, Trump departed from his prepared remarks, saying “Islamic extremism” instead of the more carefully crafted phrase “radical Islamist extremism.”

Early Wednesday, Twitter night owls wondered what explained the lack of a follow up tweet until six hours later, when the typo-tweet was deleted and replaced by one making light of his misspelling.

Who can figure out the true meaning of "covfefe" ??? Enjoy!

Some of Trump’s most memorable tweets have been even later at night — or earlier in the morning, depending on one’s schedule.

It was 2:30 a.m. Sept. 30 when he tweeted about a former Miss Universe contestant he knew who had started campaigning with his opponent, former secretary of State Hillary Clinton. He suggested his tens of millions of Twitter followers “check out sex tape and past” and asked rhetorically if Clinton had helped her become a citizen. At 3:40 a.m. on Aug. 7 Trump said then-Fox News host @megynkelly “really bombed tonight.”

He can be more civil after sunrise (in the East). At 6:40 a.m. on Feb. 15, the media was “going crazy with their conspiracy theories and blind hatred,” Trump tweeted.

Last week, the Chicago Tribune started an article about Trump’s first foreign trip this way: “He stifles yawns. His eyes narrow. And ultimately, when he garbles part of his speech, an aide explains that President Donald Trump is ‘just an exhausted guy.’ ”

“Sleep evangelist” Arianna Huffington has been using Trump as her highest profile argument for a good night’s sleep since her Colby College commencement speech last May.

Well-known to be liberal, Huffington is an equal opportunity sleep critic. She has compared Trump’s erratic and occasionally questionable behavior to that of former President Bill Clinton, who also boasted about how little sleep he got when he was president.

“Mood swings, fogged memories, incomprehension of a comprehensible problem and the occasional re-tweeting of Mussolini,” Huffington told Colby graduates, according to an article on CentralMaine.com. “These are all symptoms of chronic sleep deprivation, according to the American Academy of Sleep, except the re-tweeting Mussolini part — that’s just pure Donald Trump.”

Huffington, author of The Sleep Revolution, is especially critical of Trump and others who brag about sleeping little and compares sleep deprivation to being drunk.

Allies distance themselves from U.S. after Trump’s first foreign trip
Americans just broke a record for being stressed. Here’s how to reverse the trend
Five ways to cut stress in a 24/7 world
“I’ve never smoked a cigarette in my life,” Trump told Rolling Stone in 2011. “I’ve never had a drink, never had a joint, never had any drugs, never even had a cup of coffee.”

He did confess to liking a “little caffeine,” noting that “Coke or Pepsi boosts you up a little.” The habit continues. In April, the Associated Press reported Trump pushed a red button that presidents have long used and a White House butler brought Trump a Coke.

“It’s not that you can’t, it’s that you don’t want to be in that situation if you’re taking a spleen out. — or the leader of the free world,” Winter says.

Other possibilities Winter cited for Wednesday’s tweet was “micronaps,” which occur when people fall asleep for short periods of time but don’t realize it or inattentiveness, seeing Trump’s tweet wasn’t finished or immediately followed up.

My take for #covfefe: #Trump takes pills to sleep. On the keyboard, E and F keys are in the path for writing COVERAGE. He then fell asleep.

In her new study, Cirelli says the mice were kept awake for about seven additional hours for five days with “novel objects to keep them interested. They stay awake playing. It’s not too difficult.”

Sleep researchers have used animals to demonstrate that the neurons in the brain can take five or ten minutes or as long as an hour to get to “full wake performance,” she says. “I have learned that certainly applies to me. I never send any email for at least two hours after I wake up because sometimes I make huge mistakes. That’s my rule.” 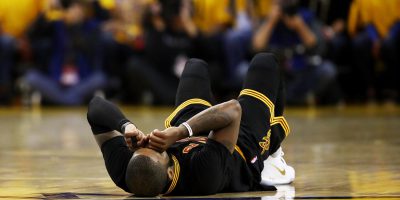